Bitcoin has flashed some immense signs of strength throughout the past few hours, once again pushing up towards $16,000
Bulls appear to be gearing up for another test of this crucial resistance level
If rejected here, this level could be confirmed as a mid-term top that is followed by immense downside
A break above this level, however, would but a move to its all-time highs on the table
One analyst is noting that he is now looking to regain exposure to BTC after taking some profits, stating that he expects a sharp retrace
This potential retrace could cut as deep as $12,000, according to a chart he put forth

Bitcoin and the aggregated crypto market are continuing to flash signs of strength as buyers gain control over the entire market.

Even altcoins have been catching up to BTC as of late, signaling that the aggregated market is finally beginning to reap the rewards of the benchmark cryptocurrency’s recent rally.

That said, Bitcoin has been struggling to break above $16,000. This level has held strong as resistance on multiple occasions.

One analyst is noting that he is watching for a sharp retrace before he adds to his positions. His chart indicates that this retrace could cut as deep as the $12,000 region.

At the time of writing, Bitcoin is trading up just under 2% at its current price of $15,590. This is around the price at which it has been trading throughout the past week.

A few days ago, however, it faced a sudden influx of selling pressure that sent its price reeling as low as $14,800. It has pushed higher from here, signaling that this is a support region.

Because BTC’s recent price action has lacked conviction on both sides, it remains unclear what will break its consolidation pattern within the $15,000 region.

Analyst: BTC Could Retrace as Low as $12,000 Before Rebounding

One analyst recently offered a somewhat grim short-term outlook on the cryptocurrency, noting that he is waiting for a strong retrace before moving to regain exposure.

He stated that his orders are set within the $12,000 region, although he would be willing to move them to $14,000 if Bitcoin’s support here holds.

“After capitalizing on some profit in BTC I find myself on the prowl for a reentry. Orders are set in the green box in case there’s a sharp move to test prior resistance for support. If price pulls back to $14k without filling the orders I’ll use emasar to adjust accordingly.” 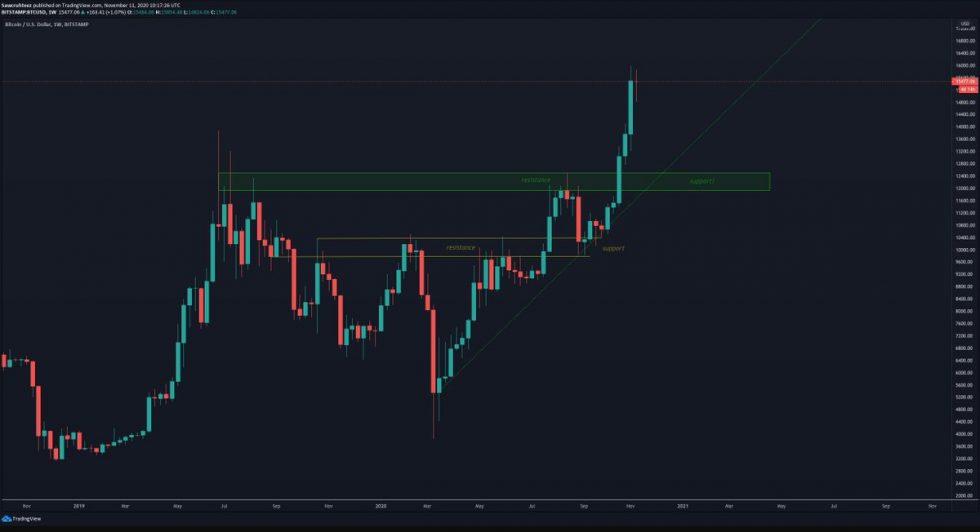 The coming few days should provide investors with insights into whether this ongoing consolidation phase will persist.