Institutional and retail demand for cryptocurrencies is at an all-time high. Tesla’s bold move to allocate some of its wealth into Bitcoin seems to have encouraged other firms to diversify into digital assets.

One of the many firms that want to avoid “the risks of missing out on the potential for Bitcoin becoming the global benchmark digital asset,” as Bloomberg said, is Meitu. The Hong Kong-based app builder announced that it recently scooped up roughly 175 BTC at an aggregate value of approximately $10 million.

The most recent purchase adds to the 765 BTC and the 31,000 ETH that the firm had acquired in March. Meitu now holds more than $100 million worth of the top two cryptocurrencies by market capitalization, reaching the goal it set for itself in its Cryptocurrency Investment Plan.

Even though Meitu is one of the first publicly listed companies in China to add Bitcoin and Ethereum to their balance sheets, other well-known firms such as Square and MicroStrategy have gone into a buying spree.

While demand continues to rise, Bloomberg revealed in a recent report that Bitcoin built a price floor at $50,000.

The financial media giant affirmed the overhead resistance around $60,000 is weakening over time, setting up the perfect conditions for a potential breakout. 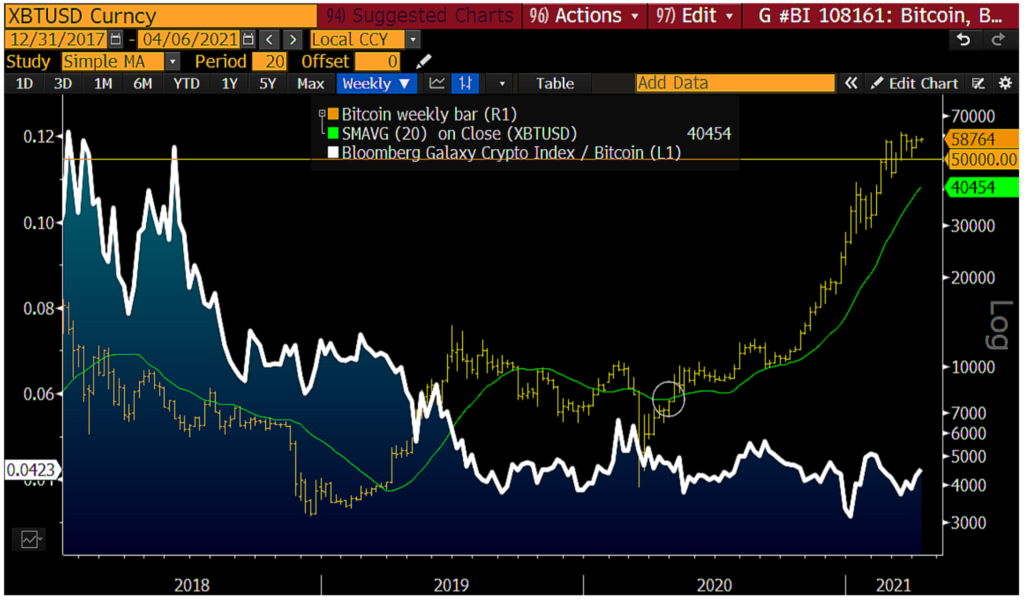 Bloomberg expects the ongoing consolidation phase to end with a bullish massive upswing. But in the event of a sell-off, the 20-week moving average at $40,000 is seen as the most “extreme downside risk.”