Earlier this year, PancakeSwap briefly became the number one DEX by volume. But thanks to Polygon and its lower gas fee structure compared to layer 1 Ethereum, Uniswap has seen off the challenge.

PancakeSwap unable to sustain its rise

Much of Q2’s volume this year came in May, the height of the local top in markets. As prices and interest in crypto have wained substantially since then, it would be surprising if this trend continues in Q3.

All the same, a monthly breakdown by DEX volume shows a significant drop in volume for PancakeSwap in June. Uniswap ends Q2 2021 on top with the highest market share.

“While for a brief moment in April the breakfast-themed DEX flipped Uniswap in volumes, since then its market share has plummeted due to the rise of Uniswap V3 and the fizzling out of the Binance Smart Chain Ecosystem following the May crash,” Messari analysts wrote. 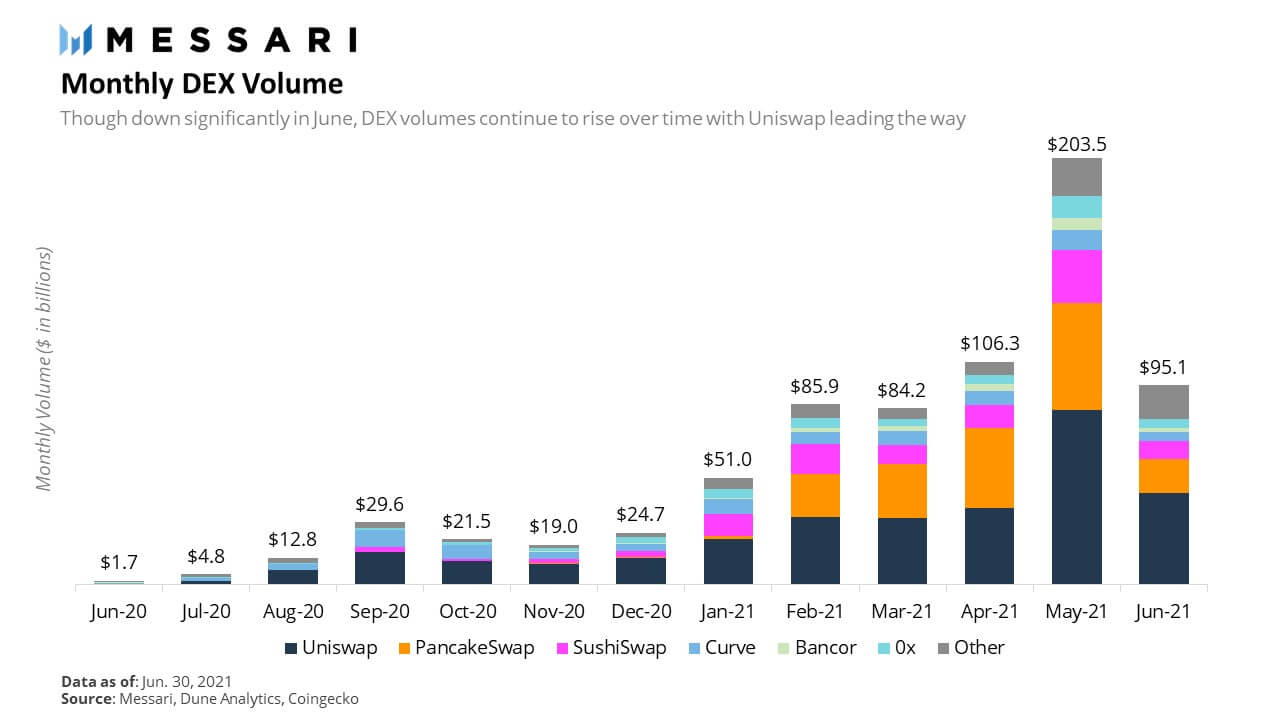 PancakeSwap launched on the Binance Smart Chain (BSC) in September 2020. It was hailed as the answer for those wanting to do DeFi without paying exorbitant gas fees for the privilege.

This one selling point enabled it to rise quickly, despite criticisms that BSC’s proof-of-authority network was too centralized or that PancakeSwap’s source code was ripped off from Uniswap.

But the rise of Polygon has seen an erosion in BSC’s share of DEX volume.

Polygon is the key

At one point Polygon was a side player operating in the Ethereum ecosystem. However, Ethereum core devs turned to it as a solution in losing ground to BSC.

Following a rebrand from Matic, and a renewed vision of its place in the Ethereum ecosystem, Polygon quickly established itself as a big part player offering layer 2 scaling via its multichain approach.

“Polygon is a protocol and a framework for building and connecting Ethereum-compatible blockchain networks. Aggregating scalable solutions on Ethereum supporting a multi-chain Ethereum ecosystem.”

Polygon’s technology has transformed Ethereum into a multi-chain system, which they dub the Internet of Blockchains. This is similar to how rival networks such as Polkadot, Cosmos, and Avalanche operate. But with the added advantage of Ethereum’s network effect.

Co-founder of Polygon Jaynti Kanani said what sets them apart from other layer 2s is the ability for developers to choose which scaling solution best meets their needs.

“What sets Polygon apart from other L2 solutions is our Layer 2 aggregation approach, which allows developers to pick the scaling solution best suited for their needs, be it ZK, OPR, Data availability chain or other scaling approaches like our PoS commit-chain.”

Since the rebrand, over 450 projects have partnered with Polygon, and transactions per day now exceed that on Ethereum.