What makes the crypto market’s rise to $500 billion different from 2017?

by CRYPTOSLATE
in Cryptocurrency
5 min read
0

The last time the total market capitalization of cryptocurrencies surpassed $500 billion, in December 2017,  the industry had no idea a world-shattering crash was waiting just around the corner. And now, with Bitcoin nearing the coveted $20,000 point, the industry holds its breath once again as it prepares to leap into the unknown. But, this time around, things might be different.

Looking back: Vitalik Buterin’s somber outlook on the 2017 crypto boom

It’s the middle of December 2017—the crypto markets are ablaze with FOMO and the price of even the most novel tokens seems to be turbocharged. Fresh off its ATH, Bitcoin is the talk of the town, with analysts and experts alike racing to give out their predictions as to where this rally will take the rest of the market.

At a time where an incredible amount of wealth exchanged hands, Vitalik Buterin, the founder of Ethereum, emerged as a rare somber voice warning the industry about the heavily inflated bubble.

On Dec. 13, 2017, Buterin shared his thoughts in a Twitter thread, asking the industry whether the latest market rally was actually earned.

While Buterin’s tweets seem to have been largely overlooked at the time, garnering little to no media coverage, Bitcoin’s latest rally has put a significant amount of weight on his words.

So total cryptocoin market cap just hit $0.5T today. But have we *earned* it?

As history has shown, Bitcoin didn’t earn its incredible December rally, failing miserably to keep its value once the hype died.

At the time, Buterin argued that while a $500 billion market cap is viable, the industry needed to fulfill some tangible goals that actually back its value.

“How many unbanked people have we banked?” he asked. “How much censorship-resistant commerce for the common people have we enabled? How many dApps have we created that have substantial usage?”

He went on to suggest that the ambitious promises made during the ICO boom were nothing more than promises—hundreds of projects designed to take advantage of smart contracts and DeFi but with nothing to show.

How much value is stored in smart contracts that actually do anything interesting?

Micropayment channels, a promising yet largely underused aspect of many large blockchains, also failed to deliver much value to the industry. “How much actual usage of micropayment channels is there [actually] in reality?” he went on to ask.

The answer to all of these questions is definitely not zero, and in some cases it’s quite significant. But not enough to say it’s $0.5T levels of significant. Not enough.

He went on to explain that while the crypto industry managed to increase its market cap two hundredfold, it hadn’t increased its potential at the same rate. And in certain key segments, such as payments, it even managed to regress, he added.

Bitcoin’s relentless rally to break the coveted $20,000 barrier will cause a massive ripple effect across the entire industry. But will the thousands of cryptocurrencies that are currently circulating be able to hold their value beyond a short-term rally at the end of the year?

Has the crypto industry actually earned its rally this time around?

Well, if we were to analyze the market according to Buterin’s 2017 principles we would most definitely reach a rather optimistic conclusion.

When it comes to the value stored in smart contracts, the 2017 bull run has nothing on what we’re seeing in 2020. The ICO boom that led the 2017 rally is minuscule in comparison to the size of the DeFi market, which recorded just under $14.3 billion in total value locked (TVL) at press time. 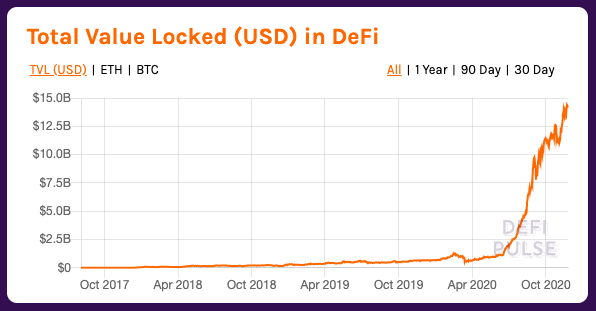 Having a lot of money at stake isn’t a guarantee that things won’t go south. However, the fact that over $14 billion in value has been put into a relatively new market segment will, at the very least, serve as an added barrier that prevents another catastrophic bubble from bursting.

How many Venezuelans have actually been protected by us from hyperinflation?

While Buterin’s 2017 vision of having cryptocurrencies shield the people from Venezuela from hyperinflation and an overreaching socialist government might seem naive in 2020, the fact that Bitcoin usage in the country exploded in the past year only serves to reinforce the narrative that this rally is actually different.

In 2020, cryptocurrency platforms that allow tipping have already begun tapping into the world of microtransactions. However, it’s important to note that, while conducted on a much higher level than three years ago, all of this still largely exists in the realm of possibility.

Jesse Proudman, the CEO and co-founder of Strix Leviathan, a crypto hedge fund, remarked on the differences between 2017 and 2020 by saying:

“The 2017 market was largely fueled by retail speculation against a backdrop of lofty ideas with limited execution: big dreams with little to show. Fast forward three years and we’ve seen an enormous shift in the sophistication and capabilities of this asset class. The charlatans have largely been banished after a three year drought. 2017’s ideas have been supplanted by functioning applications and technologies. And market participants now include insitutional investors who have welcome the continued regulatory clarity. While the price action may feel similar, the fundamentals are anything but.”

Another factor that makes this bull market different than the one Buterin described in his tweets is the rise of institutional investors entering the space. According to the latest “Flows&Liquidity” report from JPMorgan, the second half of 2020 was marked by a huge increase of institutions flocking to Bitcoin as a long-term investment. The report put Grayscale’s Bitcoin trust at the head of this institutional rally, noting the parabolic rally of its trust in Q4. 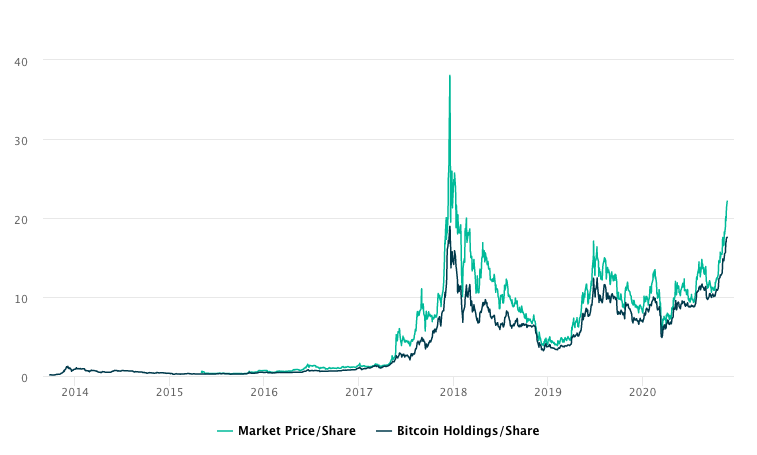 The performance of Grayscale’s Bitcoin Trust from 2014 to 2020. (Source: Grayscale)

Given the fact the Grayscale Bitcoin Trust is currently at three times its Q3 numbers, at almost $10 billion under management, it’s safe to say that the latest Bitcoin rally has seen a significant push from institutions.

Not that fast to ditch the billions of dollars of stake they have in the industry, institutions might be what keeps the latest crypto rally from consolidating too much.

So, has the crypto market earned its latest rush to a market cap of half a trillion dollars?

While the right answer to this question might require a bit more historical context, we can be certain that, at the very least, it earned it more this time around.