SUSHI and AAVE, the governance tokens of major DeFi protocols SushiSwap and Aave, severely pulled back after the price of Bitcoin rallied beyond $40,000.

Analysts suspect that the profits from DeFi tokens throughout the past few weeks have flown back into Bitcoin.

DeFi down bigly, when will it begin recovering?

Throughout early February, the DeFi market has outperformed the rest of the cryptocurrency market.

Two DeFi blue-chips SushiSwap and Aave performed particularly well in the past month.

Aave has seen a strong rally due to its dominance as the most widely-utilized lending protocol. It is considered to be the go-to DeFi bluechip and major investors believe it could surpass the valuation of the most valuable fintech company during this cycle. 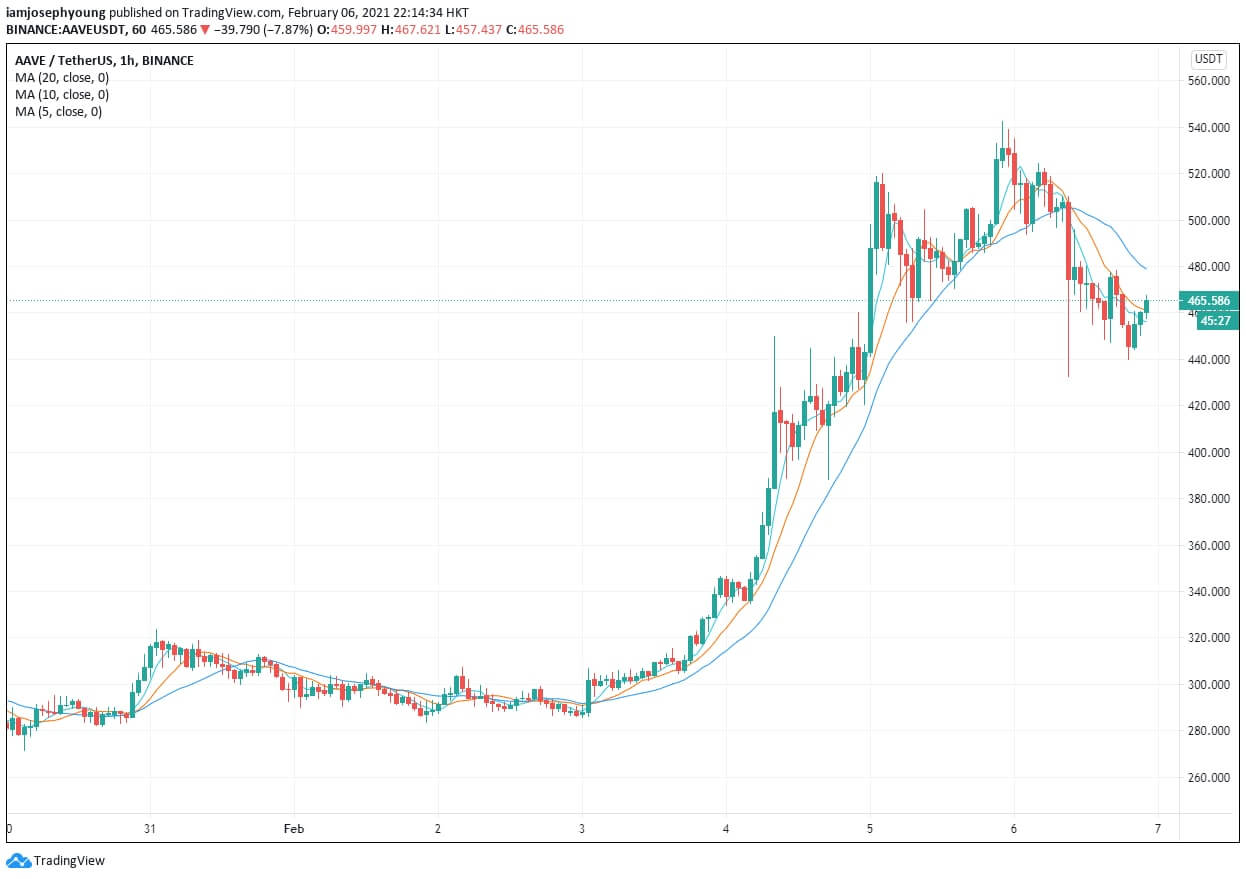 The price chart of AAVE. Source: AAVEUSD on TradingView.com

SushiSwap is an automated market maker (AMM), which is like a decentralized exchange that enables users to buy and sell assets. Its value has been increasing rapidly because investors see a small gap in terms of user activity volume between SushiSwap and Uniswap.

While the DeFi market rallied, Bitcoin generally stagnated, allowing Ethereum, AAVE, and SUSHI to outperform Bitcoin during that period.

But, as Bitcoin saw a relief rally above $38,000, which has been a key resistance level, profits began flowing back into Bitcoin.

There were also major short-term catalysts for Bitcoin, such as MicroStrategy’s meeting with 1,400 conglomerates to discuss BTC.

The crypto market is largely cyclical; hence, profits often flow into Bitcoin from altcoins and vice versa. This means that once the initial wave of profit-taking passes, DeFi would likely recover once again.

Tyler Reynolds, an entrepreneur and an investor in DeFi, said that the DeFi market is still so small. As such, over the long term, DeFi would likely rally strongly with the momentum of AAVE and other DeFi tokens, especially throughout 2021. He said:

“Here’s the thing — DeFi is still so small that BTC and ETH can stay flat or even moderately increase and DeFi can still drop >40% At some point, everyone who has bought has bought and there’s not enough cash on the sidelines willing to pay these prices. That said, I’m quite confident that none of the top coins have seen their highs for 2021 even if we dip for the next 2 months.”

Currently, the entire valuation of the DeFi market is comparable with three “OG” altcoins: Cardano, XRP, and Litecoin.

AAVE and SUSHI would likely lead the recovery of the DeFi market when the appetite for DeFi tokens spark once again. 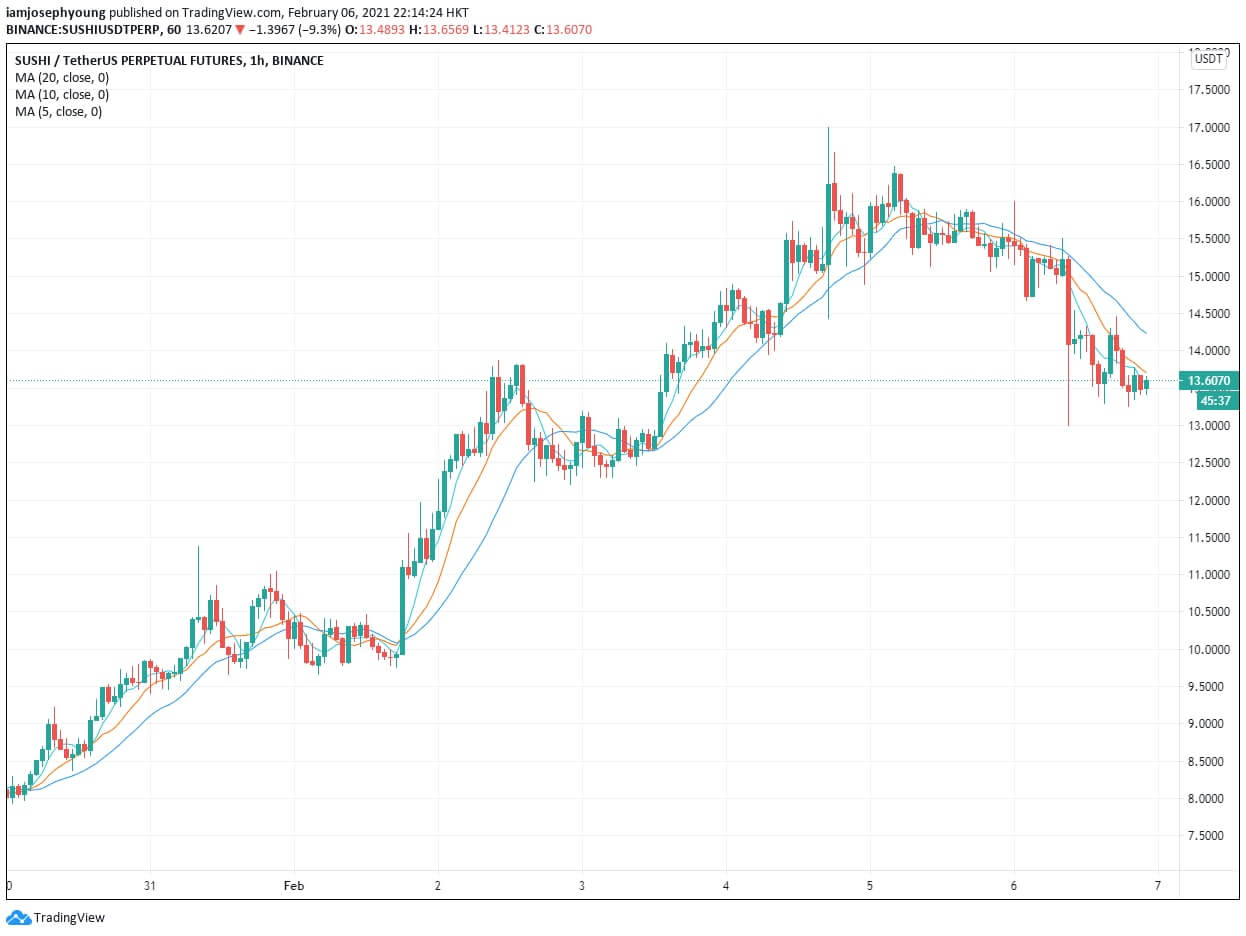 The price of SUSHI. Source: SUSHIUSD on TradingView.com

AAVE and SUSHI are already showing signs of recovery after defending the $13 support level and the $450 support area, respectively.

Explore all DeFi coins on CryptoSlate.

Credit Card Companies Should Offer Stablecoin Payments or Be Left Behind: Gartner

Tokens from the Binance Chain ecosystem are surging today, led by Binance Coin’s (BNB) own example—which broke above $270...

The yellow metal has now fallen to its lowest-ever value against Bitcoin, the digital gold, in terms of the...

Almost 72% of all ADA is now staked on Cardano

Almost 72% of all ADA is now staked on Cardano | CryptoSlateScreengrab showing the total staked value for Cardano...

The price of Ethereum is declining against both Bitcoin and the U.S. dollar. This comes as the dominant cryptocurrency...

In a conversation with CNBC about Bitcoin, JPMorgan co-president Daniel Pinto said the demand for Bitcoin will come at...